What's next for the School of Data CH

About once a month, there is a call of Open Knowledge chapter leads: a diverse, intelligent, very active group of people around the world that it is an immense privilege to have access to. Over the years I been involved in a series of such „Open“ projects - Open Data Index, Open Access Button, Open Budgets, Open Data portals…

One thing about Open: just like any human construct, working in endeavors labelled with this term requires all the tenacity, wit and dedication you can muster to keep up with the other human beings involved. It seems that the more engaged in a topic, the less patience we seem to have for fall-out, the more energy we expend defending hard-won turf. That is, when not stuck so deep in code to even notice …

A year ago we forked the concept here to bring the School of Data to Switzerland, as promised to members of the association Opendata.ch at the 2015 General Assembly in the form of a Working Group.

After speaking to potential participants, I got the feeling there were way too many further education offerings in Switzerland, that „people“ didn’t need „yet another“ statistics course. And I wanted to combine my passion for electronic art with my eagerness to learn data science. SODA would be an attempt to expand on MAKE, with a creative interpretation of our shared ideals. @sodacamper an experiment in alt-identity. Do we say it’s just ADHD, many things shallowly tried? Is there a „market“ at all for any of this? Both statements must have truth to them. To decide, I became thoroughly invested in this virtual study group slash art collective.

Meanwhile in ongoing discussions at Opendata.ch, a revised strategy was being developed (slowly but surely) in which data literacy would play a key role. Our aims are to bring together activism and work, work together as a professional group. Today’s announcement is a major step in this direction:

Branching out interests into parallel domains leading to a lack of shared ownership, personal ambitions that prevent relinquishing of control: these are growing pains for every organization, and this 5+ year project is definitely experiencing them. Yet Opendata.ch is today a construct with serious political, commercial and social relevance, and not slowing down.

How is our School of Data doing? While we are on the map, there is still no mention yet of Swiss activities at schoolofdata.org. Continued outreach and requests for follow-up and collaboration to neighboring schools are slowly simmering. The Swiss project is dispersed, with no coordination existing outside of my continued plugging. We worked for a few months on our general plans, but did not follow through with the logical next steps of securing funding and pulling together regular, distributed activities.

I write this after a very positive data literacy workshop on Saturday, where everything I learned through Open Knowledge and the School of Data came to the forefront. The participants were themselves experienced activists and changemakers, who would walk right out if they felt their time was being wasted. I was too tired from the hackathon to be nervous, but over the past year we have done this a few times (cumulative): 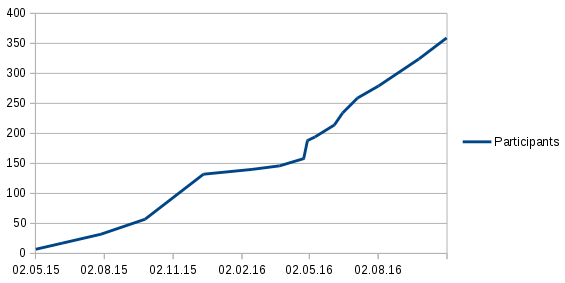 The question comes up: what do I do besides run this project?

On any given day I introduce myself to people semi-randomly as being a coder, a consultant, in an association, as ‚champion‘ of open causes, a dad with two youngsters. In the end it’s all one and the same - the data is telling:

Besides coding, I post hundreds of times a month to the soda.camp Slack and Discourse, and try to drop in at least once a week into discuss.okfn.org and not get distracted by too many other Slacks. I write longer posts at blog.datalets.ch and promote these once in a while to opendata.ch. Open data is not the sole focus, but it is a key ingredient in almost everything about soda.camp.

I have wished many times that a roadmap and responsibilities of a working group or even an association could be agreed upon collaboratively, with our members and supporters, using the digital tools we so like to promote, before the meeting. Where we would just sit down to negotiate roadblocks and plan activities. This has been working quite well, and you will see evidence of it in our meta forum. Two other new associations I am supporting are doing just that:

Then there is the bigger picture:

From the Semantic Web to the Decentralized Web…

The blockchain as the world’s largest open database. And today, bots, Machine Learning and Artificial Intelligence – all making closed data a non sequitur, an obsolete variable, a closed (ha ha) issue. If the data isn’t out in open, it won’t be found. You are, effectively, offline. Go party

I wrote about this already here, and you can track the influences of this hype/evolution in FizzBuzz. I cannot fix all problems on my own, but as colleagues, as a community, we must be able to address it together a step at a time. The only thing I can do is to stop blaming circumstances and face the issues.

At MakerFaire Zurich, I presented a short overview of the road that led me here over the past decade. Next to me Urban Sand from OpenKI, who said at one point that it has basically taken them 7+ years so far and they are still struggling, but stomping forward relentlessly nonetheless. Even just that point on its own was inspiring, and teaching.

We could all do with some more loving kindness, so I’m going to take a break right now and send someone I have been neglecting an expression of gratitude for their support

Sure, the headline is readable. Of course, the goals may be sound. But if a project tries to appeal to you just because it claims to „make it open“ - do ask what that commitment means to you. Be prepared to hold people to it, again and again.

Go a step further: see whether their behavior holds true to your ubuntu, to your philosophy. Do not buy into hype. Do not think a community is inclusive and tolerant just because they say so: try to find proof, ideally with data.

I’ve tried my best now to lay it bare. I know it’s a lot to take in. But it boils down to a simple question: do we have enough experimental data to support the hypothesis that this is an excellent, creative way to go about starting a School of Data, to dig into algorithms, to code beautiful things, to work with the young and the old.

Or should we stop this now and try something altogether different? … Like to learn to play the Rebac. 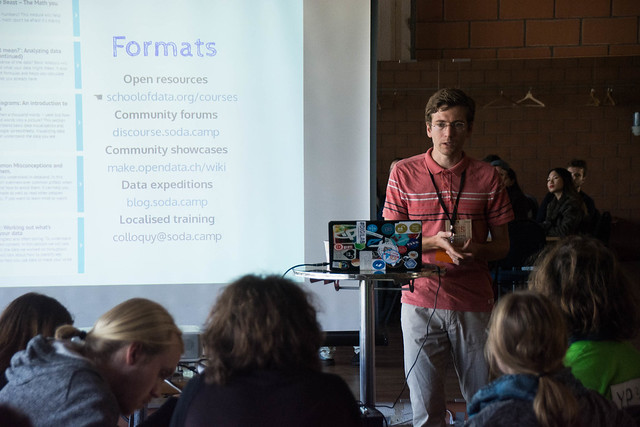 After a period of reflection and reboot following the last workshop at Social Innovation Summit, things have been coming into focus. I am increasingly sure that it makes sense to deconstruct the soda.camp experience, take one last good look back and move forward.

Bringing diverse people and technologies together for creative, human-data-centric facilitation is something I really enjoy doing, from one hackathon and workshop to the next. I will try to focus energies on local spaces and continuous projects, develop my own creative toolbox, and apply it to the canvas at hand.

I just joined a coworking space++ in Bern which started with a singular Vision and launched to great public reception last year. We have had parallel journeys so far, which in the past weeks we started linking closer together. Right now this is taking shape in a proposal for development of an extension to the space (opinions and additional ideas welcomed!)

Data art projects, demoshows, the Coding Dojo - we will have a shiny new home next year to continue and expand on all this. The Slack will be dedicated to supporting this transition.

Meanwhile, the School of Data, a primary motive force for this platform, is growing in reach and strength. New people are coming in to support the project. Bright ideas, clear strategies on how to execute them. There is interest, and demand - Data Literacy is needed more than ever at a time of momentous change and complexity of issues. This forum will from now on be dedicated to organising and monitoring the activities of School of Data in Switzerland, a project we are going to relaunch into 2017.

How does this sound? I’d love to hear your thoughts - public or private.