On November 14, 2017, the Opendata.ch, Swiss chapter of Open Knowledge, held a workshop at Volkhaus Zürich to discuss the progress of the association since founding in 2012, the challenges in front of us, and possible scenarios in the future. Some rough stats on the workshop participants:

The following scenarios were discussed and debated. They will be further elaborated by the Task Force described further down.

A combination of User Group and Service Desk seems to be the one favored by most. Our discussion revolved around this proposal. Every member of the board has a clear thematic or functional role. 2 hours per week, 80% of the meetings.

In this part of the discussion we addressed the issues of making our association more efficient & effective on a day-to-day basis.

SRF reported about MeatStory (intiated at the Open Food Data Hackdays & incubated by Open Food Data)! Listen to it in Swiss German via goo.gl/iPjLG6, starting at 3:20 minutes. https://t.co/LrWZ3KRVEM 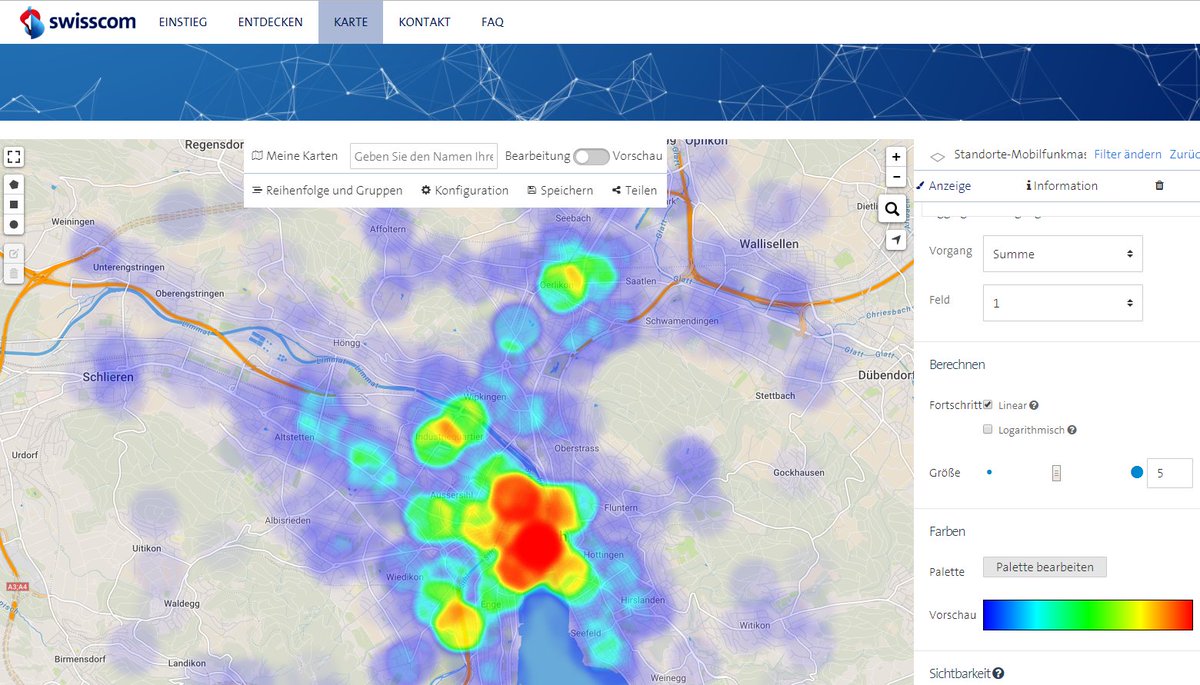 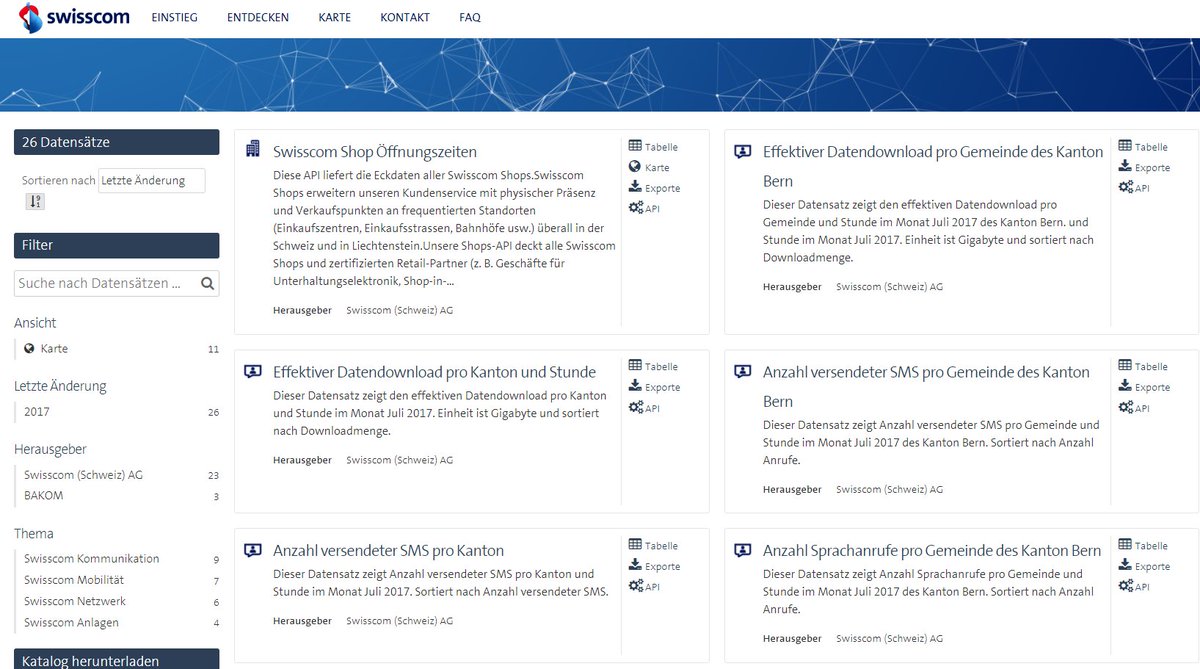 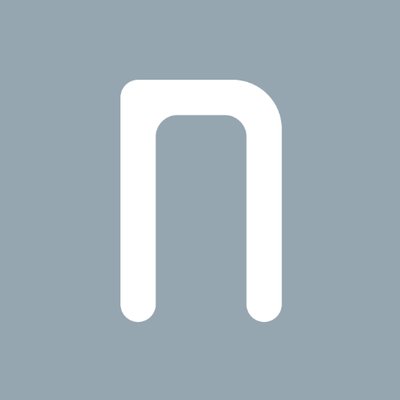 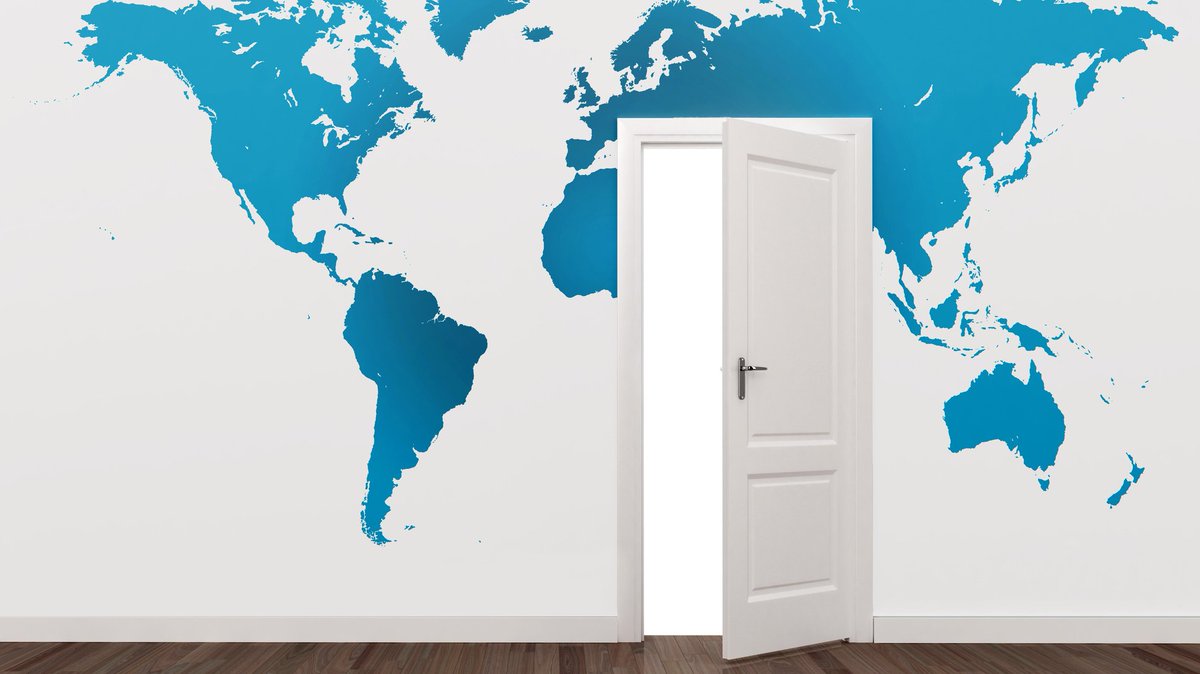 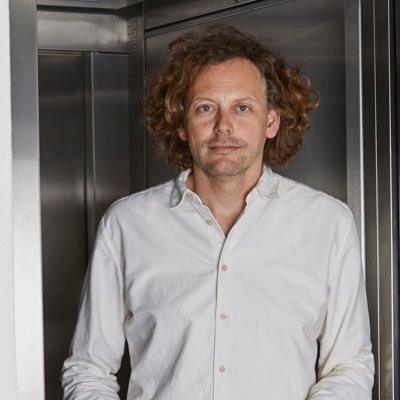 I am so thankful to all of today's @OpendataCH 2020+ workshop participants for their engagement and voices that they shared. It was #ResPublica in action!
Pulse check on commitments
oleg 24. März 2019 um 12:55 #2 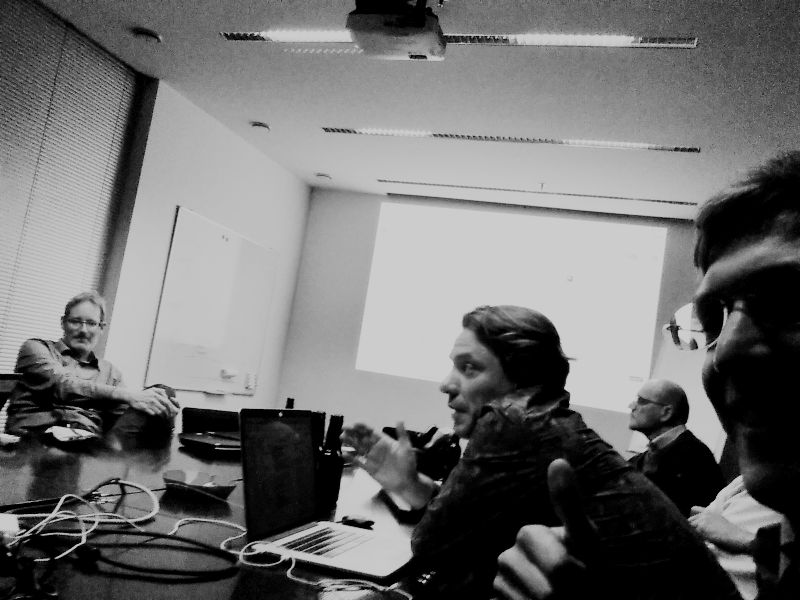 Over the past months the group of volunteers that agreed to debate and propose revisions to the association has continued to work through the many topics and questions around the future of Opendata.ch. Today I joined one of their workshops for the first time, by request.

At the Task Force meeting this evening I was asked to elaborate on the role of Switzerland in the Open Knowledge network, our obligations as Local Group, and what motivations we have to continue being on board. I answered to the best of my ability, attempting to provide fair answers - and shared several numbers (“data points”) to address the last point:

The current version of the Open Definition, a document of fundamental interest to every Open Knowledge Chapter and activist.

How completely available and accessible open government data is in Switzerland according to latest result in the crowdsourced survey by Open Knowledge, the Global Open Data Index.

Switzerland’s position in the Paradise Lost Blacklist, part of the Open Data for Tax Justice Network coordinated by Open Knowledge.

The number of results for a search matching any of switzerland suisse schweiz svizzera svizra in OpenSpending, a flagship data standardisation effort at Open Knowledge. At least there is 1 result at the new DataHub (41 on the old), the central data portal run by Open Knowledge.

The number of followers we reported having on Twitter in our application to become a chapter of OKFN in April 2012. @opendatach has 5’230 today.

The number of United Nations Sustainable Development Goals, supported by Open Knowledge through sibling initiatives including the OD4D network, The State of Open Data, and the School of Data.

According to soon-to-be-open data from the Federal Statistical Office, the total percentage of Swiss residents who were members of an association or a group in 2015. Part of the social-cultural landscape of a country with an arguably unique vantage point on international law, data protection and other current affairs.

Today Opendata.ch has around this many active individual and institutional members, of which I hope that most will continue supporting both a national and international, accessible but technically cutting-edge, “trusted, non-partisan, pioneering and passionate” agenda for a popular Swiss open data association…and that Open Knowledge continues as a network and organization to rise up to the challenge of being that association’s main international partner.

Thanks to the Task Force for their continued efforts: looking forward to hearing the 2020+ vision presented at the General Assembly on July 3!

If anyone reading this wants to help change some 0’s to 1’s, here is one good starting point:

Introduction OpenSpending is a free, open and global platform to search, visualise, and analyse fiscal data in the public sphere. This week, we soft launched an updated technical platform, with a n…

Running a popular association takes work, but it isn’t rocket science. It begins with listening to your members. And ends when there’s no-one left to listen to.

The recommendations of the Task Force were presented in a meeting to the board members on April 10, 2018:

Reviewing these brings to mind some great feedback we got a couple of years ago, written down by my friend and colleague Antoine Logean, that I’d just like to jot down here as well for posterity:

(1) „During the assembly we had no chance to discuss or take part to the strategy of the association for 2016. It was an unilateral communication“

Antoine writes: „involving the association members in a proactive dialog to define the strategic goals for the future seems to me a must. How can we do this ?“

The 2020+ recommendations from our Task Force of active members of the community described here are one way. An active online community is another. Regular events and meetups like Open Data Day / Beer where the plans and challenges are openly discussed are key as well.

(2) „In general the association status and tranktandum should be sent 10 days before the meeting so that members has a chance to react, to give a feedback.“

This is basically an organizational challenge, that should be addressed with a functioning executive (Geschäftsleitung) that has the support they need to communicate efficiently with the community.

(3) „The association has a too strong political lobbying character. Many opendata activists does no more find in our association the root message/vision“

Antoine cited Simon Chignard, who once gave a nice analogy: he said that the open data movement suffers of the same syndrome that the software development 15 years ago has: (Stallman - free software foundation – Opening as goal in itself as a moral value) versus ( Open Source form O’Reilly – Opening as mean to improve the software development process). „The same is now happening at the OK/OKF and the same start to emerge by us. We have to find a solution here.“

The Swiss Data Alliance founded by André Golliez is well on its way to establishing itself as ground zero for ‚data politics‘. We still need to petition for public and political support, with an Open focus and at the grassroots level that the mentioned activists will enjoy being involved in. It’s a pragmatic, working solution that addresses a fundamental community interest. But it is not supposed to be a split: the two sides do need to complement each other - we need to be active in advocating for economic, social and legal change using every channel available including the lobby

(4) Many people missed an introduction where one redefines again what is open data, why this makes sense etc.

„The more you explain it, the more I don’t understand it.“ – Mark Twain

What is really needed is stronger orientation around the Open Definition, clearly outlined focus in the association’s MANIFEST and a working scope that is simple and obvious to every participant. A sprinking of data literacy and having a book in hand helps

(5) We get the reputation to dictate what opendata is, to transmit the message that opendata outside our association is not really opendata, that we are the gate keeper.

Antoine suggests that we really should work to avoid this kind of complaint, encouraging any local initiative that aims to work on transparency with data. And that if we want to go on with a kind of Make label „it should be also clear that this is only one way to do it, that there are many other way, that might be more appropriate or even better.“

Open is the journey, not the destination.

(6) Many persons did not understood why [big corporate] was invited, what it has to do with Opendata.

Antoine argues here that it was a poor presentation and unclear stakes of the company that were the problem. I would argue that in the modern world, corporates are persons too, and if said persons are confused by what they are trying to say, then they should consider looking at the data.

Or just read the book: 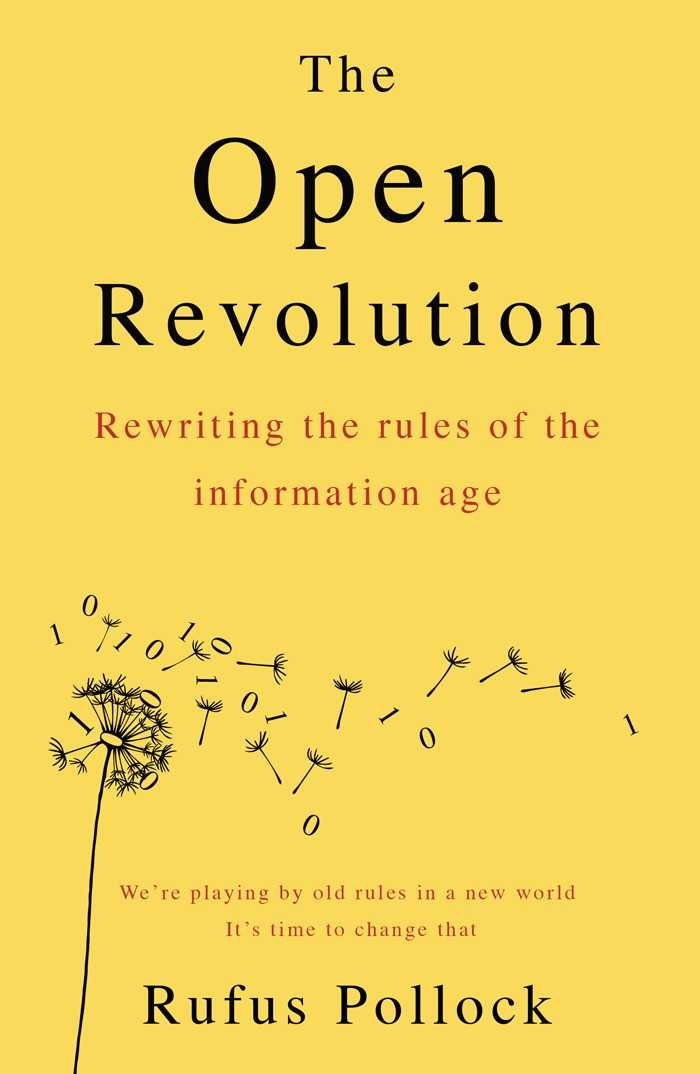 Rounding off a year of discussion and planning, we launched a new strategy,and voted in a new board of directors earlier this week at a meeting hosted by the Bern University of Applied Sciences. 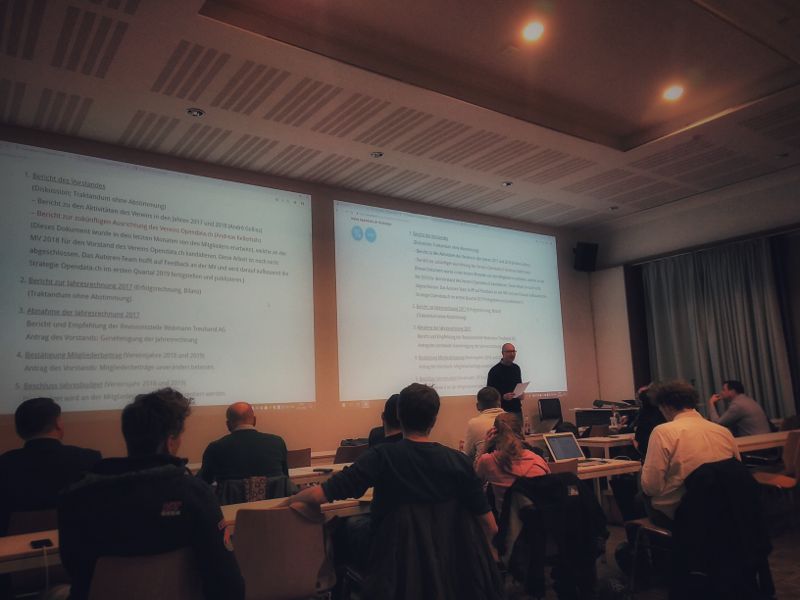 We welcomed new board members - Andreas Kellerhals taking the torch from André Golliez, Mario Cacciatore stepping in as new treasurer, Izet Ahmetovic, Beat Estermann, Rahel Ryf, Christian Trachsel and Ladan Pooyan-Weihs - while applauding the efforts of those stepping out.

You can find some impressions of the event on social media, as well as a welcome interview with our new president.

This was followed by today’s announcement of the renewed (2019-23) open government data strategy of the Swiss Federal Council. Aiming to ensure an open data first policy in all federal offices by 2020, the most notable change is the transfer of responsibility for opendata.swiss project from the Federal Archives to the Federal Statistical Office. Our association’s statement in response to this is on the blog. The ambitious strategy of Opendata.ch, now entering it’s seventh year, is summarized here - with my translation below:

The association advocates open access to data, information and knowledge and the free reusability of data (“Open Data”). Through this we are engaged for a society in which everyone has the same chances to be informed about the future, and actively participate in shaping it.

Opendata.ch helps to shape the digital transformation of society through active promotion of a culture of openness, transparency, participation and cooperation:

In order to achieve the goals, the association Opendata.ch cooperates with like-minded partners from the private and public sectors, and is committed to the following focus areas:

A range of instruments and forms of action are invoked for this:

Translated with help from www.DeepL.com/Translator

The final document has now been posted and we are working on translations.

A chance to review the initial impacts of our new strategy, share your feedback with the board and community will be on July 4, 2019 at our [un]conference located in the SBB headquarters in Bern.